What is a pumpkin headed bugbear anyway?

The title "Pumpkin Headed Bugbear" evokes many visions. A bugbear is a pretty alien concept. You begin to ask yourself all of these insane questions that can become maddening. Is it a bug the size of a bear? A furry bug with claws? An atomic age creature with the body of a bear and the head of a fly? Then let's make this strange concoction even more bizarre by sticking a pumpkin on top of it all. Is the pumpkin a jack o lantern worn like a mask? Is it even a pumpkin or is it a head that looks like a pumpkin?
(Though in all honestly, if you're here you probably know what a bugbear is. If you don't know, then that paragraph was probably much more detailed than the fleeting wonderment of what a hairy goblinoid brute is.)

I picked the name because it's an esoteric piece of history about one of my favorite D&D monsters. The bugbear is a folklore representation of the boogeyman. In my opinion the name is just as interesting as the creature it's self. As per Wikipedia...


Its name is derived from the Middle English word "bugge" (a frightening thing), or perhaps the old Welsh word bwg (evil spirit orgoblin),[2] or old Scots bogill (goblin), and has cognates in Germanbögge or böggel-mann (goblin), and most probably also English "bogeyman" and American English "bugaboo".

In D&D bugbears are hulking hairy goblinoids (distant cousins of goblins) that are surprisingly stealthy. Their footsteps are silent and prefer to open an engagement with ambush. They break the stereotype of the traditionally stealthy creature, they are not lithe and small. Their shadows fill entire doorways but the weight of their clubs are already cracking and breaking bones before you realize they are there (ask two of my players). I love that they are both brutish and cunning.

So the pumpkin...where the hell does that come from? Way back in the mid-70s Gary Gygax, one of the two men that created Dungeons and Dragons was commissioning a piece of art. When he got the piece back the bugbear had the head of a pumpkin. This is what Gygax is quoted saying about the piece


"The pumpkin-headed bugbear was an artist taking literally my description of the monster as having a head like a pumpkin, i.e large, flat oval." 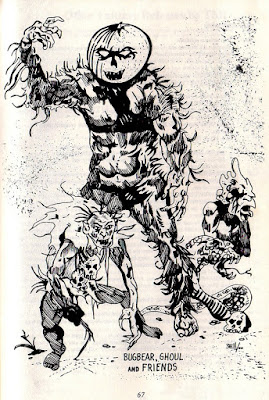 I came across this strange illustration just a couple years ago. Wizards of the coast, the current owner of D&D released a limited edition box set of the original little white books that started an industry. I was reading through each of them when I came across a splash page image that depicted a handful of menacing monsters. Right in the middle towering over the others was the pumpkin head bugbear. I thought "What the hell is that thing? It's crazy" The description in the book said very little if anything. Before this, to me bugbears had very different portraits. This one did not look like an abusive mogwai at all. It was child like ingenuity, they took two really awesome things and mashed them together while making laser sounds. Halloween plus bugbears, how could you go wrong? You can't.

Lastly one of the Bugbear gods looks like he'd be down to party.

Posted by Spookyboots at 9:22 PM